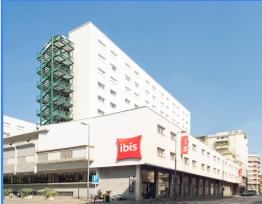 Milan, the capital of Lombardy, has a population of 1.3 million people. It is the biggest industrial city of Italy with many different industrial sectors. It is a magnetic point for designers, artists, photographers and models. Milan has an ancient city centre with high and interesting buildings and palazzos, which is why so many people from all over the world want to see the city of glamour.

The ibis Milano Centro hotel is located in the center of Milan, a stone's throw from the Milano Centrale train station and the Repubblica metro stop. An ideal base for exploring the cathedral, Milan's La Scala opera house and the fashion district. The rooms are soundproofed and air conditioned and all have free WIFI. Comfortable meeting rooms also make this the perfect place for conferences and meetings. The bar is open 24 hours a day, and the Lineauno Bistro' restaurant serves lunch and dinner.

The ibis Milano Centro hotel is ideally located for exploring the city: a stone's throw from the Centrale train station, the cathedral and esteemed works of art such as Leonardo da Vinci's Last Supper. Milan Linate airport is just 3.7 miles (6 km) away.

Milan’s origin goes back to 400 B.C., when Gauls settled and defeated the Etruscans.

In 222 B.C. the city was conquered by Romans and was annexed to the Roman Empire. After 313 A.D., the year of the Edict of Tolerance towards Christianity, many churches were built and the first bishop was appointed: Ambrogio was such an influential person that the church became the Ambrosian Church (7 December is a holiday to honour Sant’Ambrogio). In 1300 the Visconti family which are noblemen from Bergamo, Cremona, Piacenza, Brescia and Parma ruled and brought a period of glory and wealth to the city. The Duomo was built in 1386 and became the symbol of Milan.

The Sforza family assumed the Castle and the power of the Visconti family and finally Milan achieved peace after many years of war against Venice and Florence. Under the Sforza duchy the city began the development of sciences, art and literature. Ludovico il Moro (Ludovico Sforza) called Leonardo da Vinci and “il Bramante” to his court.

In case of More information please explore the link: https://en.wikipedia.org/wiki/Milan

For any type of inquiry and support,
you may send an email to
info@icehm.org